Does My Home Have Moisture Intrusion?

Previous Next
Does My Home Have Moisture Intrusion?

We in Minnesota are bracing for the transition from one wet season to the next, praying our homes aren’t impacted by “moisture intrusion”. I’ve had two requests for these specific investigations this week so I wanted to shed a little light on the different ways moisture can be a menace to your home.

What is Moisture Intrusion?

The term refers to unintended moisture that enters through the “Building Envelope”.  The building envelope consists of the exterior shell of your home that’s designed to repel the elements. Examples include: the roof, basement, windows & doors, exterior walls and the drainage plane, foundation waterproofing, exterior house wrap, ice and water shield, and roofing felt, that is behind the exterior finishes.

Moisture intrusion can be obvious and easily found or very subtle and require instruments and testing to locate the source.  There are three main “moisture transport vehicles” that create avenues and allow water into your home.

The most common moisture intrusion issues I see in Twin Cities’ homes are a result of “bulk moisture movement”, also known as liquid flow (rain, snow, ground water). This type of intrusion is typically immediate, easily discovered and also the most damaging. Three conditions are required to allow bulk moisture flow into a building: 1) a source of water 2) an opening or failure in the drainage plane of the building and 3) a driving force such as gravity or pressure. 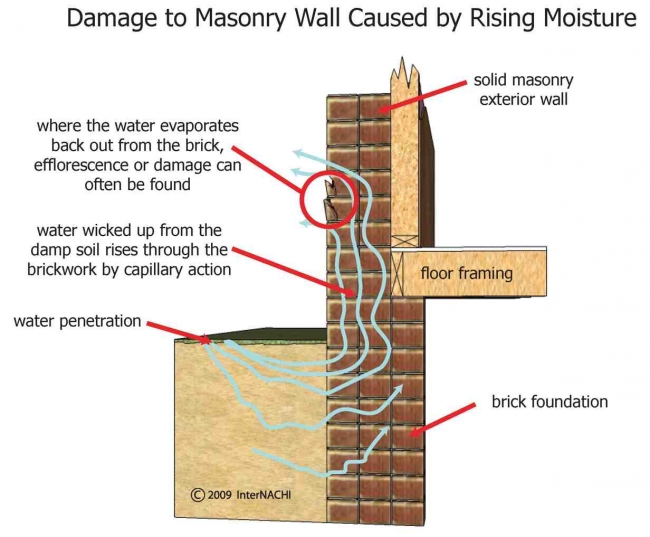 Capillary action refers to the ability of water to travel up against the pull of gravity through a porous material. It works because the friction of the moisture against the wall surface (adhesion to the wall) actually exceeds the cohesive forces between the water molecules. Although not as serious as bulk water movement, capillary forces are both destructive and secretive, since they often work and accumulate in commonly unobserved areas. They can potentially cause significant damage over a period of time without a homeowner’s knowledge.

Air-transported moisture (water vapor hitchhiking on air) can leak into, or out of buildings. Both uncontrolled pressure sources (wind) and controlled sources (fans and air handlers) can move significant amounts of moist air past a home’s exterior through openings and improperly flashed transitions. A similar process known as diffused air flow forces small amounts of moisture in the form of water vapor to pass directly through a building’s envelope. The amount of diffused air flow (vapor) that occurs in a home is determined by two things: the driving force that pushes it and the permeability of the building material the vapor is passing through.

Ok, thanks for sharing all this great info, Tom, but now what?

Eliminating moisture intrusion sources as early as possible is wicked (as they say where I grew up) important in caring for your property. Examine your house regularly to look for any new staining or moisture. If you find it, remember the concepts we discussed to help guide you to the source. Sometimes, your nose can be a good guide. If you smell a musty odor, follow your nose and see if you can find a probable cause.

If you know moisture is coming in, but can’t find it, it’s time to bring in the professionals.  The longer you wait to solve a moisture intrusion source, the more expensive the fix becomes.

To assist our clients, Branch Property Investigations provides specific moisture intrusion testing, inspection and consulting services for property buyers and owners to verify that Building Envelope systems have been installed correctly. We have nearly 25 years experience solving moisture issues. For more information, contact us at (612) 440-8466 or schedule a “Moisture Intrusion” investigation online.